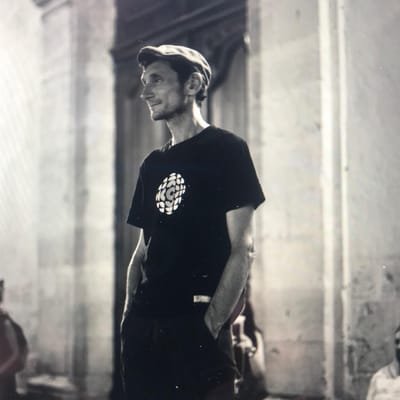 Nicolas Marechal writes with the snippets of images he has been tirelessly collecting for over a decade. Chosen for their shape, their colour or their meaning, he grabs elements that capture his attention - from brochures, erotic magazines, art history books and encyclopedias - assembling them according to their own intuition. This incessant search for the perfect image verges on obsessive when it comes to finding the missing piece to complete a collage in process… Once collected and ordered, he begins the game of assembling. Each piece develops slowly and organically from a central theme until meaning arises.  His priority is to create a balanced whole, in shape, proportion and colour. Even if most of the elements making up a piece have been chosen for their individual qualities, it is only after passing strict tests of coherence that they come together within a whole piece.
From a constrained environment emerges a realistic universe that defies reality. Thrown into this surrealist world, beyond fundamental laws of the universe, the spectator is invited to let his mind interpret at its will. In the spirit of Rorschach’s ‘Taches,’ the pieces lead the observer on an introspective voyage through their own fears and fantasies.